Between Coulsdon and Redhill from the train I saw decommissioned red telephone boxes stand close together in the cold weather.

What makes the prospect of death distinctive in the modern age is the background of permanent technological and sociological revolution against which it is set, and which serves to strip us of any possible faith in the permanence of our labours. Our ancestors could believe that their achievements had a chance of bearing up against the flow of events. We know time to be a hurricane. Our buildings, our sense of style, our ideas, all of these will soon enough be anachronisms, and the machines in which we now take inordinate pride will seem no less bathetic than Yorick’s skull. The Pleasures and Sorrows of Work, Alain de Botton

Perched by the window on a plane due to fly from Munich to London is a well-suited man with hair combed back from a widow’s peak who dominates more than the space he has paid for, V-legged, but one row behind the edge of alpha-class, where it seems he might think he belongs. He is a 30-something banker or consultant. He dials in to London-based friends. No rest during taxi. He has had meetings in Munich and more meetings await in London he reports unselfconsciously. He hasn’t decided whether to go out or not he says. He probes politely into schedules tethered to the people that are in reach at the other end of the line.

The main ingredient of a good vanitas is real or implied contrast. Hamlet holds the skull of the jester, a fellow of infinite jest who would pour a flagon of Rhenish on someone’s head. Vanitas says: beware of what you sacrifice yourself to.

… self-sacrifice is a passion so overwhelming that beside it even lust and hunger are trifling. It whirls its victim to destruction in the highest affirmation of his personality. The object doesn’t matter; it may be worthwhile or it may be worthless. No wine is so intoxicating, no love so shattering, no vice so compelling. When he sacrifices himself man for a moment is greater than God, for how can God, infinite and omnipotent, sacrifice himself? At best he can only sacrifice his only begotten son. The Razor’s Edge, W. Somerset Maugham

It’s not often that we catch a stranger in the act of self-mockery. As a train reaches its terminal a commuter gathers himself to leave, but fastens the satchel cover over its shoulder strap. He notices what he has done when he attempts the motion of slinging the bag over his shoulder. He chuckles at himself, unfastens the clasps, extracts the strap, closes the bag and slings it over his shoulders and keeps smiling at no-one.

If you are addicted to the pleasures of self-sacrifice you will be pleased to know that there is an infinite supply of pointless work. A person in a position of relative importance volunteers to take on a tedious task in a meeting with his peers. Within thirty minutes he has delegated the task to a workhorse.

Above Erlangen’s beer cellars is a sculpture garden dedicated to the work of Heinrich Kirchner (1902-1984). Seventeen bronze statues stand, lie, pose: exist simply here. The theme, says the notice, is man’s relationship with nature. The older statues are smaller, the ones he made later in life are monumental. Later in his life, Kirchner was Professor at the Akademie der Bildenden Kuenste in Munich. You may never have heard of the Akademie though it once aspired to embody the pinnacle of the art of sculpture.

King Ludwig of Bavaria had wanted Thorvaldsen to lead the Akademie. He wrote to Thorvaldsen in November 1830. The art of sculpture has fallen low here, he wrote. To acquire a master such as yourself for Munich is necessary. Pressed again by Ludwig a year later, Thorvaldsen recommended the services of Ludwig Schwanthaler. Protected by Ludwig, the Akadamie monopolised the production of statuary in the region. Schwanthaler’s school was known for its solid workmanship and factory-like production line: a recipe for stagnation. When the master died there was no obvious heir. A native of the Akademie Max von Widnmann took over and injected no new ideas for forty years. In 1906 Ferdinand von Miller, Akademie director at the time, appointed Adolf von Hildebrandt whose approach to sculpture was focused on its overall effect from a distance. 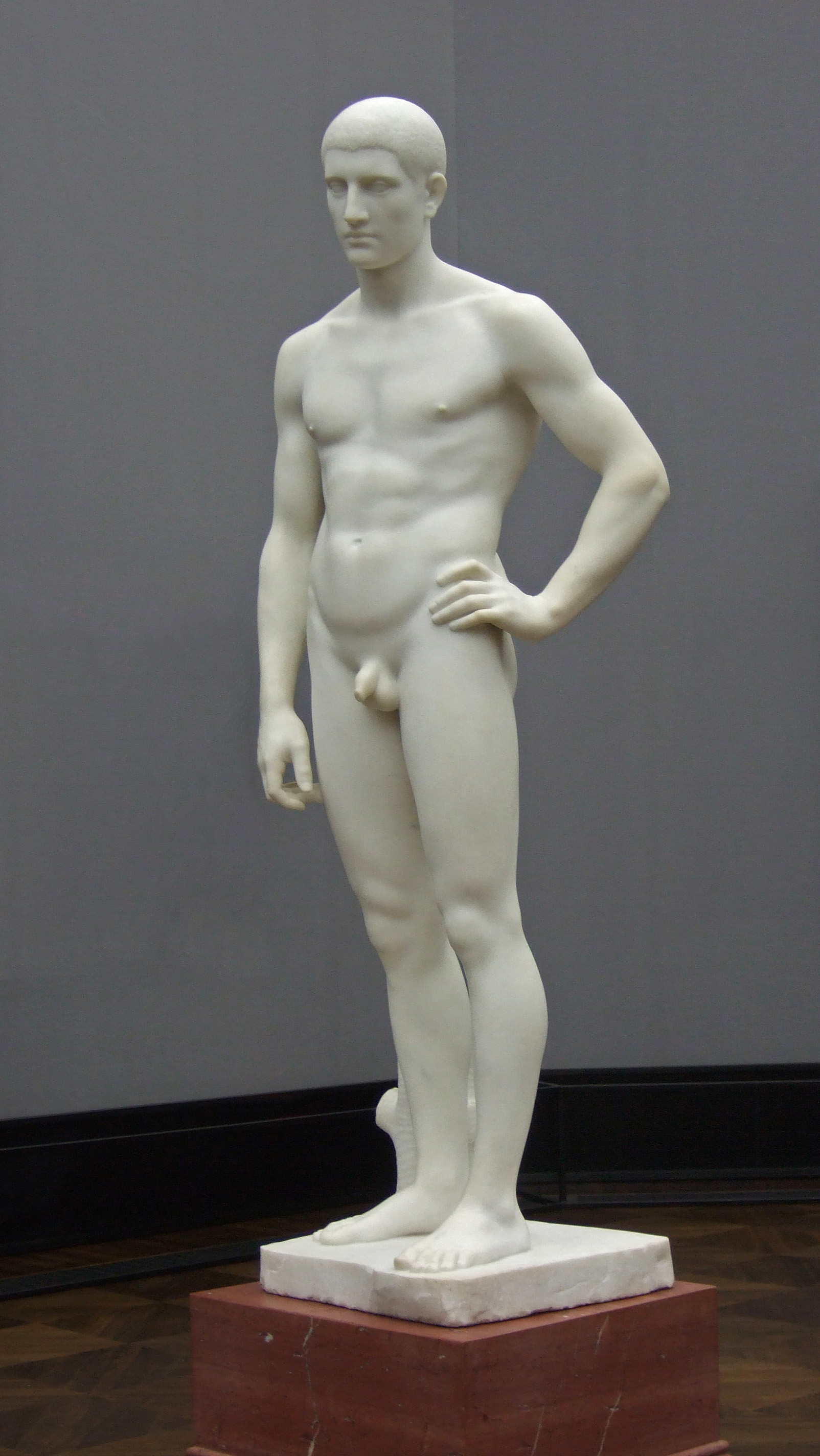 Hildebrandt was interested in form: how and not what.  He severed the connection to historical, decorative or narrative subjects. Hildebrandt’s successor was Hermann Hahn who maintained a continuity of style, but with tastes a bit more archaic than classical and less strict than Hildebrandt in allowing hints of stories from his statues. His work was praised by the influential Nazi art critic Bruno Kroll. The Akademie supported and sought sponsorship from Adolf Hitler when that time came. Josef Thorak, a party-loyal sculptor, became a professor supported personally by Hitler. One of his projects was a statue glorifying the construction of motorways. Later on, Heinrich Kirchner was one of a group of new leaders at the Kunstakademie who embodied the desire for a new start while also rooted to the past as former students of Hermann Hahn. Kirchner’s statue Der Wanderer stands as an expression for post-war re-orientation. (Reference.)

The elements of which all language consists are signs or symbols. Words
are signs. Sometimes they are said to represent things; sometimes the operations
by which the mind combines together the simple notions of things into
complex conceptions; sometimes they express the relations of action, passion,
or mere quality, which we perceive to exist among the objects of our experience;
sometimes the emotions of the perceiving mind. An investigation of the Laws of Thought, George Boole

Back on a train to London and on a borrowed seat in first class I watch a man read an article about listening to music in public.

I snatch second-hand glimpses of the article. I am the only audience of this public reading of an article about listening to music in public. I imagine the reader must be connected to the writer of the manuscript. He reads carefully and underlines certain passages. He has a thin, hawkish face, white hair, rimless crystalline glasses.

Opposite the reader sits a traveler with thick round horn glasses. He is foaming from the mouth: leftover cappuccino bubbles have settled between his thick lips after a sip from his brown cup. The cup’s outer surface is ruffled for grip. He wears a thick signet ring on the small finger of his left hand. A speck of cappuccino has fallen onto his cashmere sweater. A scarf is threaded through itself around his neck. He has a tote bag. He looks like a Monocle reader, I think, but Tyler Brûlé would not spill his foam so easily.

All the world is not, of course, a stage, but the crucial ways in which it isn’t are not easy to specify. Erving Goffman

First class has become more popular over the last weeks as more people settle in seats forbidden to them. the threat of a ticket inspector threading a way through bodies and folding bikes is remote enough to feel comfortable here. Yet there is an uneasy tension between those who know they belong to these seats and those who know they don’t, but have grown used to them.

Pontius Pilate is caught between law, mob-rule and self-fulfilling prophecy. He asks good questions, but his options collapse. The line between sacrifice and self-sacrifice may be a delicate matter of faith. Pontius Pilate: What accusation bring ye against this man? Chorus: If he were not a malefactor, we would not have delivered him up unto thee… Pontius Pilate: Take ye him, and judge him according to your own law… But the priests report that they do not have legal power to execute a man themselves. Pontius Pilate questions the man brought before him: Art though the King of the Jews? Christ: Sayest thou this thing of thyself, or did others tell thee of me? … Pontius Pilate: What is truth? … The prefect reports back to the crowd: I find no fault at all… But the mob insists and even a lashing of the accused does not soften their mood. And again, Pontius Pilate asks the accusers to deal with the matter internally, but the mob refuses and demands a conflation of religion and state law: We have a law, and by our law he ought to die. More questioning, and the prefect reminds the accused that he has the power to execute him. Christ: Thou couldest have no power at all against me, except it were given thee from above: therefore he that delivered me unto thee hath the greater sin. And again Pontius Pilate attempts to release the man, but the mob threatens him: If you let this man go, though art not Caesar’s friend. And the prefect relents though he insists on his version of the sign on the cross: “Jesus of Nazareth, King of Jews” not the ironic “Jesus of Nazareth who said: I am the King of Jews.” All or nothing.

I demanded freedom for myself and I was prepared to give freedom to others. It is easy to laugh and shrug your shoulders when people act badly to others; it is much more difficult when they act badly to you. I have not found it impossible. The conclusion I came to about men I put into the mouth of a man I met on board ship in the China Seas. ‘I’ll give you my opinion of the human race in a nutshell, brother,’ I made him say. ‘Their heart’s in the right place, but their head is a thoroughly inefficient organ.’ The Summing Up, W. Somerset Maugham