The train is full. I settle into a seat in the first-class compartment. Here there is ample space while it is cramped outside. I recognize others who are not supposed to be here either.

The man next to me is marking tests labeled “Human Synergistics: Life Styles Inventory, Description by others, LSI2.”

How does he describe himself? Is someone who evaluates states of mind with standardized tests a coach, a psychologist or a consultant?

He is a kind of priest taking confession through a score sheet.

“If one wanted to express the value of the priestly existence in the briefest formula it would be: the priest alters the direction of ressentiment.”

He wears a blue suit, sits with shoulders hunched. The crown of his head is bald. He is on a new set of test-papers, LSI1 this time: “Strengthening organizations through individual effectiveness.” (According to the website, LSI1 is a self-assessment of thinking styles, personal effectiveness and satisfaction while LSI2 is feedback provided by peers, managers, and/or sub-ordinates.)

He goes through the 20 squares on the answer sheets, adding up according to a schema in his head. Each square has 5 boxes on either side, each gets a number and he adds them all up. He wears plain black-framed glasses.

To live in a vast and proud tranquility; always beyond… To have, or not to have, one’s emotions, one’s For and Against, according to choice; to lower oneself to them for hours; to seat oneself on them as upon horses, and often as upon asses:—for one must know how to make use of their stupidity as well as of their fire. To conserve one’s three hundred foregrounds; also one’s black spectacles: for there are circumstances when nobody must look into our eyes, still less into our “motives.”

Another day: I am sitting next to a man with dark-blue Ralph Lauren glasses. He is proof-reading a paper: “plasma transfusion is commonly given to sick patients… Continues to be administered as prophylaxis…”

Plasma is Greek for moldable substance: a jelly. It holds our blood cells in suspension.

His white shirt is striped with purple shaded lines. The shades repeat in blocks of four. He has large round cuff-links. The earphones are also purplish.

His document appears to be a funding proposal to develop “algorithms” for improved plasma transfusion. Today the standard-of-care (medical conventional wisdom) is to provide plasma transfusions whenever there is a bleeding risk. “With new diagnostic methods there’s opportunity to be more evidence based… Coagulopathy is diagnosed by looking at prothrombin time… Limitations of the current standard of care, namely coagulation tests… we need to understand individual bleeding risk better…

On the table in front of him is a white plastic bottle with a label that says: “GoActive.”

One of the best means of self-defence, as one knows, is to go into the potting shed and build something that no one understands or no one knows what it is meant to be. W.G. Sebald

The conical pillar holding part of the millennium bridge’s weight is immediately reminiscent of a Whistler composition. The yellow haze of early morning sunlight has a similar quality as his blue haze. 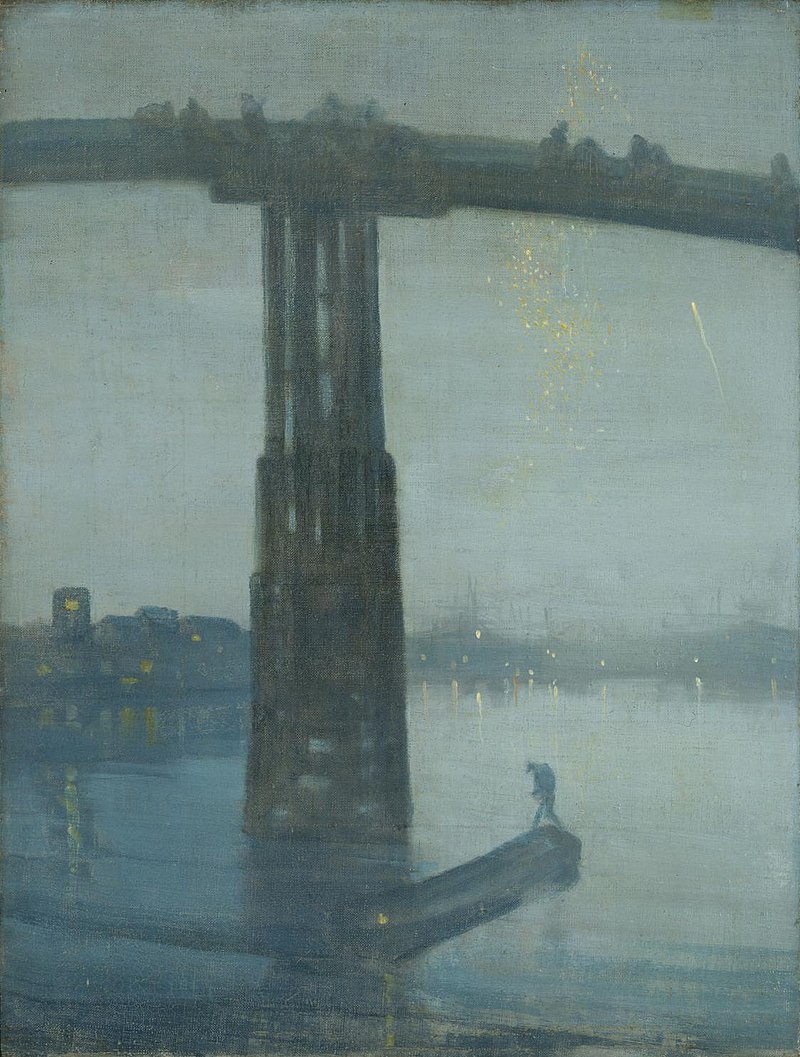 More and more inclined to the belief that a large part of beauty resides in objects… M. Verdurin’s death signified to him the disappearance of one of the last traces of the perishable social framework… which supports an art and certifies its authenticity… with M. Verdurin disappeared the eyes, the brain, which had had the most authentic vision of his painting, wherein that painting lived, as it were, in the form of a cherished memory. Without doubt young men had emerged who also loved painting, but another kind of painting, and they had not, like Swann, like M. Verdurin, received lessons in taste from Whistler, lessons in truth from Monet, which enabled them to judge Elstir with justice! … it was as though part of the beauty of his work had disappeared with some of that consciousness of beauty which had until then, existed in the world.

Consciousness is like a master craftsman or carpenter: 鲁班 (Lǔ Bān). Once the design is in place, habit takes over. Then the activity is like a copy of an implicit sketch. Like 鲁班, consciousness invents the tools it needs for its work. That’s why your choice of work matters.

Memory is like an old town: old and new buildings, crooked alleys, open areas… You can travel to the town in pictures or words:

On Luban road in Shanghai, in the Xin Guang photography plaza, the craftsmen work on the upper floors.

The ground floor is reserved for new products: Canon, Sony, Nikon, Leica, Fujifilm. The magnitude of choice produces a sense of paralysis. Why is one thing better than another?

Upstairs it smells of cigarettes and the floors are flecked. Boutique shops display curated combinations of old and new equipment. Repair shops with long tables remind me of wine bars. And there are one-man shops, which look like they belong back outside, set between tailors, watchmakers, butcher and frame shops.

At one of the repair bars four young men in black t-shirts wait for customers. Once in a while they fiddle with camera parts. A customer arrives and hands over a pink receipt. The boys crowd around him. One of them takes the lead, explaining the repairs that have been made. Suddenly he points the camera at me, aggressively, I feel. He is shooting me. He must have noticed me taking snaps of his bench.

Competition between the repair-bar and a one-man shop opposite is tense. Every new visitor to the fourth floor is met with a barrage of welcomes. The young assistant of the master craftsman radiates melancholia. The shops are numbered. The owner of C482 is keen to return to another customer who watches us with crocodile eyes.

For the ultimate reality of danger is only perceived through something new and irreducible to what one has previously known which we call an impression and which is often, as was the case now, summed up in a line, a line which would disclose a purpose, a line in which there was a latent power of action which modified it…

Remembrance of Things Past

Make some arbitrary doodle on a bit of paper.——And now make a copy next to it, let yourself be guided by it.——I should like to say: “Sure enough, I was guided here. But as for what was characteristic in what happened—if I say what happened, I no longer find it characteristic…. of course it is correct to say I drew the line under the influence of the original: this, however, does not consist simply in my feelings as I drew the line—under certain circumstances, it may consist in my drawing it parallel to the other—even though this in turn is not in general essential to being guided.

A woman with short hair eats mandarins like an unruly young boy. (Is this association an effect of some “unconscious bias”?) She wipes her fingers on her trousers. A drop of liquid hangs on her nose and incredibly it stays there unshaken by the unsteady train. The woman reaches to open her bag and I feel she is reaching for a handkerchief. No, she pulls out her iPhone. Eventually she wipes her nose sideways with her fingers and notices the wetness. The drop’s sojourn on her nose has ended. She wipes her finger on the inside of the mandarin skin. Then she licks her fingers and opens the wrapper of a Muesli bar. All the time she is engaged intently with her laptop. She wipes her nose again with the length of her index finger and immediately sucks off its moisture by holding the finger to her mouth. She never stops moving. She wears dark trousers and a suit jacket over a blue shirt with red stripes. Her ears sport flashy diamond studs and her hair is close-cropped, black and grey. A muscular jaw dips into a hollow that leads on to a prominent cheek bone. Her shiny black lacquer shoes are just visible. She has a small black handbag and a utility rucksack (Deuter) with a carabiner hanging from one of its nylon loops.

Another article is being read next to me the next morning. Systems-psychodynamics in schools: a framework for EPs undertaking organisational consultancy. “The aim of this article is to give an overview of system psychodynamics, an approach to working with organisations… the author when training as an EP had an opportunity to attend a course on below-surface dynamics…” The article is about “an amalgam of three distinct but related theories with emergent properties of its own:” psychoanalysis, theory of group relations and Open Systems perspectives.

The man wears jeans and sneakers and an olive green sweater over a red and white chequered shirt.  He has a leather briefcase between his feet. His beard is a combination of two elements (moustache and goatee) with emergent properties of its own.

A man in a red-striped shirt has found a rhythm of sleep: the head sinks towards the bulge of his stomach then rises back to an upright position. How conscious he is while his body is doing this would be a good mystery for science to explore. His shoes are tied loosely and his hands are on the tray table, index fingers propped onto a thriller.

In front of him a man wears a blue pinstripe suit with shiny shoes, reading the Times on his tablet with a Black&Red notebook between the surface of the table and his hands. His shirt stripes are horizontal and purple. He wears a green, blue, red patchwork scarf. His lips are compressed to a credit card slot and the area between his nose and chin is flat. The chin bulges out from this flatness and leads to a second chin-like bulge. His greying hair is combed back and the overall effect is greater than the sum of its parts: shabby aristo.

Meanwhile the sleeping man one row back is sinking into fits of tranquility, like a pianist sinking into his keyboard during a particularly moving or sentimental part of a favorite encore.

Later out on the street a young woman will place coins into a beggar’s cup. He will smile and she will smile. The beggar and the girl are both good looking.