Approximately one-hundred travelers coalesce into the usual small pools, regularly spaced like a smeared out sequence of 1’s and 0’s. The depth of the pools varies according to habit and ad-hoc decision-making.

Our habits are base-camps for exploration: if you usually walk to the “near end” of the platform (so that you will be closer to the ticket gates on arrival) then you are unlikely to move the opposite way to the far-end the next day.

And our habits do, indeed, in large measure, enable even our organisms to accommodate themselves to an existence which at first seemed impossible. We have all seen an old circus performer with a weak heart accomplish acrobatic tricks which no one would believe his heart could stand.

It seems to me that on average, the position of a group is biased towards the direction of the incoming train. So I try to stand further towards the near-end to improve my starting position for the jostle into the train. I am nearly always one of the first four on-board.

The Tuesday, post-bank holiday train is more crowded than usual. Even though I am third or fourth on, I have to stand. The fold-out bicycles are convenient: I rest my suitcase on one of the four saddles, one at each corner of the door-area of the train

What is the technical name for the door-area of a train?

More people enter the train at LGC: a well-dressed man in a navy suit with a cup of coffee sighs as he enters and then moves forward towards the interior doors by the toilet and lets himself slide down the wall until he is sitting on the floor.

The two women in the 4-seat section in front of me have taken up the table with their stuff: a kindle, a brown pair of sunglasses, a pink water bottle filled to about one third of its capacity, a red handbag with its carrier handles sticking up like antlers. It’s not clear what belongs to whom at first sight.

The man behind me has his sunglasses turned up to sit on his head, has earphones in his ears and is working his laptop: one hand holds it up, keyboard in parallel to his chest, head bent forward at a 30 degree angle and the screen parallel to the plane of his face.

In the 4-seat section, the blonde has picked up her kindle and is drinking from the pink bottle. The woman opposite her shuffles around in the tabled handbag until she finds her lipstick and then she re-positions her sunglasses on the table. It is now clear what belongs to whom.

A man from the next door carriage tells the navy suited man on the floor to “stay there, I’ll climb over,” en-route to the toilet.

The attentions of the two women oscillate between their phones and other activity. The blonde has turquoise finger-nails, a bronze coloured watch, a collar folded neatly over her grey sweater, but the shirt is not tucked in and flows out onto black trousers. Her face is expressive as she types, dramatic even.

She doesn’t seem to know what to do, within a single minute she puts down her phone, reads her kindle for a few seconds, then takes some colour for her lips out of her handbag, brushes the red colour on, moves her lips and chews them against each other to distribute the colour, puts in earphones, sits upright and looks at her fellow passengers intently, then at her hands, then outside, then adjusts her hair.

The driver announces that our arrival is 5 mins late due to the late arrival of the Kings Lynn “detachment.”

Standing in the aisle as the train grinds into the station: orange vested middle-aged cyclist in front of pink-jacketed woman in front of red-jumpered young man: three categories of life and a catching colourful progression.

A neatly dressed young woman with a blue baseball cap and an orange vest guides her yellow rubbermaid-branded bin until it is in the centre of the commuter flow and then she circles the area around the bin like a moon around a planet. The stream of commuters is parted by her bin and then one of the two streams is parted again by her. The travelers are like inconsequential comets emitting space debris.

A smoking young builder crosses the road and holds up a set of three buses at the junction. He walks in front of them for a while. The bearded driver of the first bus looks bemused.

Opposite me: a man with a sleeping cushion and a water bottle in a blue plastic bag. Before settling down against the cushion he whispered to himself. Three layers of clothing exposed: the shirt has a blue background and a red, yellow, green striped mask as its subject, which is bordered by small hieroglyphic signs. It is titled “Ghana.” Above the shirt, a black vest with pockets by the chest, above that a blue fleece.

A man is bent over by a pillar at the boarding gate. His phone is charging and the cable isn’t long enough for him to stand upright. “Yes, We got the Swift but it was sent to an account I don’t control. The woman who controls it is on holiday today… no, I won’t know that until tomorrow.”

Fog and a lonely white house with a red-tiled roof in a field followed by hops without leaves like songs without words.

In Erlangen a white public bus drives by with a clatter. One of its tail-lights hangs by its cabling, scraping the tarmac. It would be a good picture for an essay on the deterioration of public services. Has the driver noticed?

From the taxi at dusk, a view onto tree-lined fields. A scene that feels like a Corot: each tree in the line is different: some rounded out by their leaves, others shorter and barer, the next slender and tall. 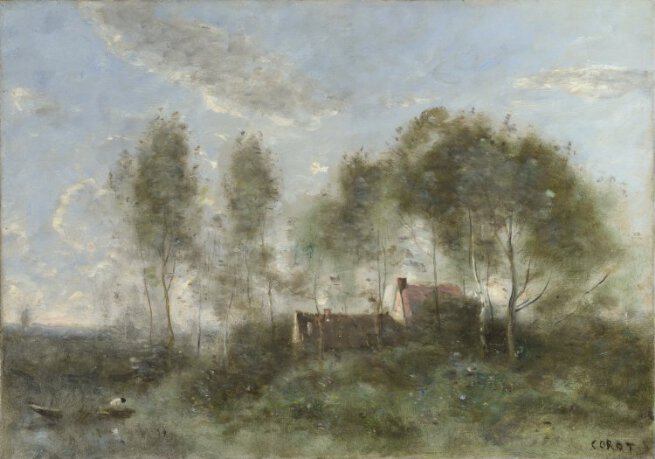 Souvenir of a journey to Coubron, Corot

The taxi driver asked: “do you go to the air-shows here?” I said I didn’t know they held any  close-by, one can live in a place and miss what is going on around it. “I have thought about going to the horse racing,” I said. “I think they’re on this weekend,” he said. “I didn’t know,” I said.

We have to learn that to preserve and express reality when we have attained it, we must isolate it from everything that our habit of haste accumulates in opposition to it.