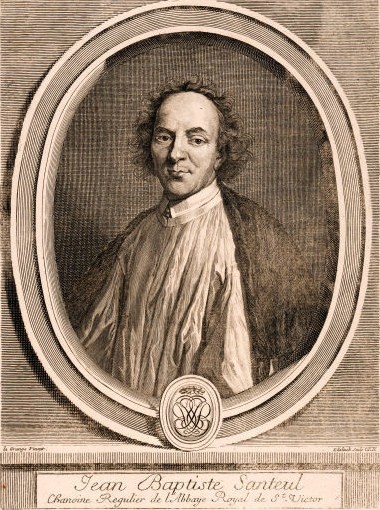 How should we balance work with play? Proust’s first novel Jean Santeuil is a young man’s exploration of life’s trade-offs. Proust’s character is buffeted by contradictory desires: should he get ahead in society or nurture his “little gift of poetry”?

William Hogarth – Industry and Idleness, Plate 1; The Fellow ‘Prentices at their Looms. Quote from Proverbs 23:21, “For the drunkard and the glutton shall come to poverty: and drowsiness shall clothe a man with rags.”

Proust borrowed the name of his novel’s main character from history. Jean-Baptiste Santeuil (1630-1697) grew up in a well-off merchant family and joined a community of lay canons at St. Victor in Paris. His career was promising. He rose to the rank of subdeacon, which was a stepping stone towards a valuable priesthood.

But Santeuil was not inclined to take the straight and narrow path. He discarded his robes and made a name for himself as an eccentric poet. People called him a “devil whom God compelled to praise saints.” He couldn’t behave himself, but he also couldn’t stop churning out glorious religious verse either!

Imagine a man, easy, gentle, affable, yielding, and then all of a sudden violent, enraged, furious, and capricious; represent to yourself a man simple, artless, credulous, sportive, and flighty, a grey-haired child; but let him recollect himself, or rather give himself up to the genius dwelling within him, and perhaps quite independent of him and without his knowledge, he will display rapture, lofty thoughts, splendid imagery, and pure latinity… To speak plainly, he talks like a fool and thinks like a wise man; he utters truth in a ridiculous way, and sensible and reasonable sayings in a foolish manner; people are surprised to hear common sense arise and bud amidst so much buffoonery, so many grimaces and contortions… he has within him, as it were, two souls, which are unconnected and do not depend on one another, but act each in their turn and have quite distinct functions…. he is anxiously craving for praise, has never enough of it, and is ready to fly at any of his critics, but in reality is docile enough to profit by their censure. I begin to imagine I have drawn the portraits of two wholly different persons; and yet to find a third… is not quite impossible, for he is kind-hearted, agreeable, and has excellent qualities.23

Santeuil coined the phrase “castigat ridendo mores” (laughing corrects morals) and lived his life according to this philosophy, dispensing mischievous advice and generally getting on people’s nerves.24 Pious folk complained that it wasn’t right to sing Santeuil’s religious songs given the author’s ungodly rottenness.

“Do not consider the workman, but the work” Santeuil shot back. Generations of worshippers agreed. Of the four-hundred hymns published by proud Santeuil, several are still in service today. His poems are inscribed on fountains all over Paris. One such inscription in the quarter of St. Honoré warns of downfall:

Oh happy Nymph, happy thy lot
Who hath this beauteous Province got,
Where all they Waters as they flow,
New lustre to the buildings owe.
Two rival Tritons sound thy praise
and high thy watry Empire raise;
But Nymph take heed, thou dost not grow
So proud, that thou forget’st to flow.25

It was the story of Santeuil’s vinous death that inspired Proust to name his first significant literary character after him. Proust was an avid reader of Louis de Rouvroy duc de Saint-Simon, a minor aristocrat who achieved lasting fame through his memoirs.

In Saint-Simon’s account, Santeuil’s death develops out of his association with the powerful Condé family. Santeuil is unable to refuse the Duke of Bourbon’s request to accompany him to Dijon and pays a cruel price.

Santeuil was an excellent fellow, full of wit and of life, and of pleasantries, which rendered him an admirable boon-companion. Fond of wine and of good cheer, he was not debauched; and with a disposition and talents so little fitted for the cloister, was nevertheless, at bottom, as good a churchman as with such a character he could be. He was a great favourite with all the house of Condé, and was invited to their parties…

M. le Duc wished to take him to Dijon. Santeuil tried to excuse himself, but without effect; he was obliged to go, and was established at the house of the Duke… Every evening there was a supper, and Santeuil was always the life of the company. One evening M. le Duc diverted himself by forcing Santeuil to drink champagne, and passing from pleasantry to pleasantry, thought it would be a good joke to empty his snuff-box, full of Spanish snuff, into a large glass of wine, and to make Santeuil drink it, in order to see what would happen. It was not long before he was enlightened upon this point. Santeuil was seized with vomiting and with fever, and in twice twenty-four hours the unhappy man died—suffering the tortures of the damned, but with sentiments of extreme penitence, in which he received the sacrament, and edified a company little disposed towards edification, but who detested such a cruel joke.

The tension between social life and artistic calling was one of Proust’s favourite themes. Jean Santeuil embodied this tension. Bursting with creativity, he could barely keep himself together. Lack of independence was his downfall. Rather than focusing on his work, he followed the Duc to Dijon. He allowed himself be reduced from genius poet to jester on a leash.

Proust was painfully aware of the dangers that high-society posed for his own creative energy. Even as he rose into the highest echelons of Parisian social life, a part of him worried that his work would suffer. The tale of Saint-Simon illustrated the worst case scenario: a creative life cut short by champagne fuelled buffoonery..26

Letting his character reflect on the balance between work and play, Proust develops the sort of outlook that might have saved Jean Santeuil’s life.

Little by little the gift of poetry which he carried within him, became the centre of his moral world, so that by then his struggles of conscience had taken on a different form. “Good” now was what favoured inspiration, “evil” what paralysed it. His drinking habits, so long as they did not make him ill and were within his power to control, as well as a certain sensual laziness, in no way hampered his dreaming, nor hindered the rich fecundity of his spirit.27

24 Here are a few examples, as recorded in 1773 by The Gentleman’s and London Magazine A woman mistook Santeuil for a priest and confessed to him on her knees. When he did not respond, the poor woman asked him for absolution. “What, do you take me for a priest?” Santeuil asked her. “But why did you listen to me?” she responded. “And why did you speak to me”, replied Santeuil, innocently. Enraged, the woman threatened to complain to Santeuil’s prior, whereupon Santeuil responded: “And I am going to your husband to give him a full acount of your conduct”. When a Parisian husband told Santeuil about his wife’s infidelities, he replied: “A mere flea-bite, or less as it is only an imaginary complaint; few die of it, and many live with it.” Commenting on the quality of a sermon, Santeuil remarked that the preacher had done better last year. But the man hadn’t given a sermon last year, remarked a bystander. “That is the very reason”, said Jean Santeuil. ↩

26 Cf. Bell, W. S., 1958, The Prototype for Proust’s Jean Santeuil, v. 73, p. 46-50. By the end of Proust’s novel, Jean Santeuil’s “poetic capacities have been destroyed by his association with the haut monde.” Similarly in Saint-Simon’s description of Jean Santeuil, “one sees a poet excessively concerned with the favour of the Condé family”↩